Though a small watershed in Virginia Beach, Rudee Inlet/Owls Creek is an amazing place for wildlife. From its surrounding woodlands and high-salinity salt marshes, to its underwater oyster reefs and tidally driven waters, the watershed is home to a wide variety of habitats and species.

As part of the Atlantic Flyway, the watershed hosts a number of spectacular bird species at various times of the year including eagles, ospreys, herons, egrets, ducks, and even loons and white pelicans. Reptiles such as snakes, lizards and turtles can also be seen, including the ornate diamondback terrapin and the occasional loggerhead, green or Kemp’s ridley sea turtle.

Mammals that visit the watershed range from the familiar muskrat, opossum, and raccoon, to the less-often seen river otter, harbor seal and even manatee. Of course, there are also many fishes and invertebrates in the waters that make it a great place to fish for species such as speckled trout.

Visit this webpage often to learn about and see photographs of wildlife in the watershed. 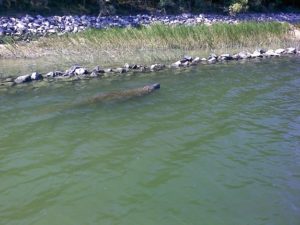 Florida Manatee
Though not a common visitor, the occasional manatee has been observed stopping in to the watershed as they move up and down the coast during the warm summer months. Adult manatees can reach nearly 15 feet in length and weigh more than 3,000 pounds. They are plant eaters and also need to have access to freshwater during their travels. Because manatees are an endangered species, it is important not to disturb them and to inform the Virginia Aquarium if you ever observe one in the waterway. They are very vulnerable to boat strikes, so it is important to navigate with care if a manatee is in the area.